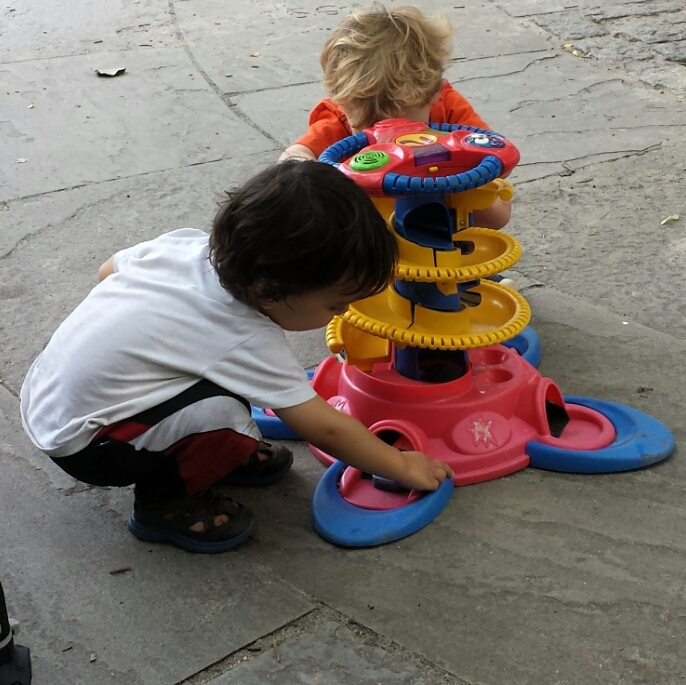 What would you do in the following situation?

Your toddler is playing with a toy truck at the playground. The truck was donated to the playground and does not belong to any child. Another child spies the truck and asks you nicely if he can play with the truck.

A) Take the truck from your child? After all, the other kid did ask nicely.

B) Tell the child that you will let him have a turn after 10 minutes, then watch your phone until that precise amount of time has passed, after which you take the truck from child and give it to the other kid.

C) Tell the kid he will have to wait until your son his playing with the truck. You repeat that answer no matter how many times the kid asks to play with the toy.

D) Ignore the other child. You don’t have time to deal with that shit.

I’m guessing most of you chose A or B. Those of you who picked D must have more than two young children and have successfully learned how to tune out other kids.

Did any of you pick C?

The question above is based on a real event. I was at our local playground, which is where toys go to die, after parents realize a studio apartment is no place for five tricycles. I love it because there are plenty of things to play with and it is perfect for my two-year-old son.

Because the toys belong to no one, there is the inevitable challenge of sharing. My mantra has always been, if a public toy is free, it’s fair game and can be played with for as long as the child likes. Yes, even for a whole hour. Yes, even if five other kids are waiting to play with it.

My son took a shine to a toy truck and began playing with it as soon as he spotted it across the playground. With a newborn to tend to, I was glad to have a chance to sit down while my son happily played with the toy truck.

Shortly after he started playing with the truck, another boy approached with interest in procuring the toy for himself. The kid figured out that I was the adult in charge of my son, and asked me if he could play with the truck. I firmly told him that my son was still playing with it, and that he could have his turn as soon as my son was finished. I didn’t force my son to stop playing just because it is “the nice thing to do.”

The kid was persistent, but I stood my ground. Yes, I felt bad for the boy. However, I knew taking the truck from my son, would just reinforce the notion that if you pester someone long enough, you get what you want. Life doesn’t work that way.

I didn’t know how long my son would play with the truck, or what he would do with it after he was done playing. To my delight and surprise, he gave it to the other boy. Yes, without any promoting from an adult, my son shared. He did it out of his own volition and was proud of himself.

I’m glad I didn’t step in and make my son give up his turn when he wasn’t ready. He showed me he was capable of sharing on his terms, and the other boy learned the tried and true mantra, “good things come to those who wait.”